Prime Steakhouses is reader supported. When you buy through a link on our site we may earn an affiliate commission.

Ribeye and prime rib are a cult-favorite in the meat community. However, these two are also confused for one another. And, we don’t blame you. Ribeye, prime rib, standing rib roast – who wouldn’t confuse them?

So, is prime rib the same as ribeye? No!

While these two cuts share some similarities in regards to names and where they come from, there are some key differences that set them apart.

As a passionate meat-lover, you must know how to treat these delicate cuts with respect and honor. It would be a sin to destroy them.

Obviously, it is crucial to learn to distinguish the two, so you would know how to prepare them properly. These types of meat are so juicy and tasty that you have to do them justice when preparing them.

In this article, we will discuss the main difference between prime rib and ribeye, see where they come from, and learn more about how to cook and season them.

I don’t know about you, but I’m already getting hungry.

What Is a Prime Rib?

Sorry to disappoint you if you haven’t been aware of this fact until now, but…

Prime rib is just a cool nickname for the good-old standing rib roast.

As the name suggests, this piece of meat is extracted from the primal rib section. Prime rib is one of the juiciest and tastiest meat cuts. If that’s not enough, it’s also among the most tender meat cuts.

This meat is so tender because the cow, during its lifetime, doesn’t use its rib muscles as much as other muscles. A full prime rib contains a total of seven ribs, which amounts to about 20-30 pounds of meat.

And, yes, prime rib also looks almost as divine as it tastes.

The center looks like a clean, soft, and delicious meat cut which is marbled with fat strings throughout. The exterior is surrounded by fat, which protects the meat from heat when it’s being cooked.

Don’t you dare remove that fat prior to grilling.

Do you want to anger the gods of grills?

I advise you not to.

And again, who loves a dry, fatless steak?

Imagine going through that whole preparation and seasoning process, putting your steak on a pellet smoker, investing blood, sweat, and tears not to overcook it.

Once this beautiful, yet arduous process is done, you can’t wait to get your hands on that steak.

Remember that this layer of fat also ensures that the meat remains tender and juicy throughout the whole cooking process.

When choosing a perfect cut, you should know that there are two main types of prime rib:

Also, my fellow meat-lovers, remember not to confuse the word prime in the name for the term prime in the USDA beef quality grade system.

The term prime rib just means that the meat was cut from the animal’s primal rib. USDA, on the other hand, uses the term prime to describe superior quality meat.

And, don’t let anyone fool you – the prime rib is as healthy just as much as it’s divine.

This piece of meat is more than just tasty and flavorful – it’s also very nutritious. When it comes to nutrition, this bad boy is jam-packed with nutritional goodies. It is rich in protein, iron, calcium, potassium, phosphorus, zinc, and vitamin B12.

I can already hear what you’re thinking.

I would eat them for the whole day every day too.

However, I strongly advise you not to go overboard. Everything is great in moderation. So, save your prime rib for special occasions.

What Is a Ribeye?

We all know ribeye, don’t we? If you don’t know it by the name ribeye, then you might have heard some other names for it:

It is famous for its mouth-watering beef taste which is so flavorful thanks to its marbling.

And, here’s the catch with ribeye.

Unless the steak is cut before the whole roast is cooked, the steak won’t be branded as ribeye.

Just like prime rib, ribeye is extracted from the animal’s rib – the upper rib, to be more precise.

In terms of size and weight, one thing’s for sure – this is one thick, large, and juicy cut. On average, a ribeye cut weighs anywhere between 9-12 oz and is around one and a half-inch thick.

Ribeye consists of two muscles – the Spinalis Dorsi and Longissimus Dorsi. This meat is also tender because the muscles aren’t used as much as other body parts during the animal’s lifetime.

However, looks aren’t everything.

Ribeye is like that evergreen combination of brains and beauty.

Or, in this case, a combination of divine deliciousness and great nutritional benefits.

It is a great source of vitamins B6 and B12, niacin, iron, selenium, riboflavin, and zinc.

Both ribeye and prime rib have a very rich taste that is quite famous.

However, the prime rib usually has a slightly more pronounced flavor because it has more connective tissue and bones. Ribeye, on the other hand, has that lovely beefy taste which is mild, yet equally as attractive.

In terms of texture, they are quite similar. They come from the same part of the animal, after all.

However, ribeye tends to be a bit tougher in texture compared to prime rib because it has slightly less fat.

But, hear me out.

That doesn’t mean that it’s any less delicious than prime rib.

Consequently, because it has more fat, the prime rib is moister. Also, when cooked, it generally has a softer texture and richer flavor.

While they are, technically, the same type of meat, as we have discussed before, there are some key differences that set them apart.

Because of these differences, the cooking process and requirements are a bit different. Below, we will go in-depth about how to cook these cuts to perfection.

How to Cook Prime Rib

First and foremost, we recommend to roast your meat bone-in, to add more flavor. However, this is totally up to you – the beauty lies in interpretation. And, every passionate grill-lover has their own method to the madness.

We are just here to provide you with some tips and tricks.

Because prime rib is so extraordinary, it doesn’t require any complex seasoning. The whole point is to let the meaty, beefy flavor shine through. We recommend a simple, yet effective, seasoning rub:

Make sure not to salt the cut before grilling. Otherwise, it will lose a lot of water, and it can get dry once cooked. Rub the seasoning on top of the meat and leave it in the fridge for 24 hours before throwing it on a grill.

When it comes to cooking, you should cook your prime rib on low heat until the meat temperature reaches 140℉.

Keep an eye on that thermometer!

If you don’t, you will get an overcooked piece of steak – every griller’s worst nightmare.

The next step is to sear the exterior of the rib and cook it for five hours at 200℉.

Check the table below to ensure that you get the perfect sear – rare, medium-rare, medium, medium-well, and well done.

How to Cook Ribeye

The same goes for ribeye. Because this particular meat cut is known and loved for its strong, beefy flavor, there’s no need to overdo it with seasoning.

We recommend going simple and using some of the following ingredients for the rub:

The reverse-sear method is often the cooking method of choice for passionate grill lovers. Here’s how to cook a ribeye using this method:

Follow the chart below to get the perfect inside:

In general, the prime rib price is higher than the ribeye price because it contains more meat. However, ribeye is a cult-favorite in the grilling community, which is why you’ll likely pay more per-pound than when buying a prime rib cut.

Moreover, the price also depends on where you get your cut. Grocery stores often set lower prices compared to butchers and meat specialty stores.

If I sold such great cuts of meat, I would charge higher for them too.

Another important factor to consider is whether your ribeye is bone-in or boneless.

If we take Costco as an example, we can see the following difference in prices:

Regardless of their difference in price, taste, and texture, one thing’s for sure – they’re both undeniably delicious.

You can’t go wrong with either one.

However, to be able to cook that perfect piece of meat, you must be able to distinguish them.

We hope that this article has clarified how to differentiate the two. And, they’re well worth the learning curve. Once you hit that one perfectly seasoned and cooked piece of rib meat, you will never go back to your old ways.

If you have any prime rib or ribeye cooking and seasoning tips and tricks (or maybe even some steak leftover ideas) – we’d love to hear it. Make sure to comment and let us know which one you prefer. If you liked this article, feel free to share it on social media as well. Have fun grilling! 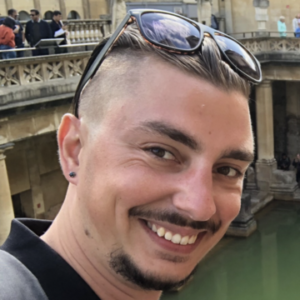 Frederik is a writer and BBQ enthusiast. He leaves no steak unturned in the pursuit of grilled perfection. He currently aspires to become the next Salt Bae.