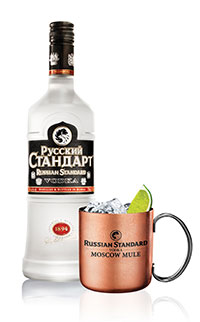 This recipe is courtesy of Donovan’s Steak & Chop House where it is served in the trademark copper mug. Born in the early 1940’s this classic cocktail has recently made a comeback. Legend has it that two distributors-one selling vodka and the other selling ginger beer- found themselves in the same predicament: no one would buy their product. The two sat down at the famed Hollywood Cock n’ Bull in Los Angeles, and combined the two ingredients into a drink to drown their sorrows. They ended up creating this classic which was very popular among celebrities who drank from personalized copper mugs. 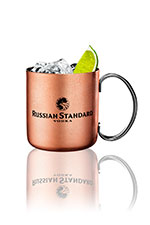 Fill copper mug with ice cubes. Squeeze in half of one lime. Add 1.5 oz. of Russian Standard with 3 oz. of Fever Tree ginger beer. Top off with a splash of club soda, stir briefly and garnish with a fresh wine wedge.

The Story of Russian Standard Vodka

Made only in St. Petersburg, Russian Standard Original adheres faithfully to Dmitri Mendeleev’s 1894 principles for the creation of vodka. Created by combining state-of-the art distillation techniques with time honored traditions and crafted using the finest ingredients of winter wheat and water of glacial origin, Russian Standard Vodka is the benchmark for excellence in the homeland of vodka.