Chef Maura “Mo” Tello, of LG’s Prime Steakhouse, has been honored as one of the country’s top culinary talents in the inaugural edition of Best Chefs America. This is the first-ever peer review guide of U.S. chefs, who were chosen after extensive interviews between their fellow chefs and Best Chefs America analysts. Chef Maura “Mo” Tello has been showcased in the informative and exquisitely produced 386 page coffee table book that was released on March 1, 2013. 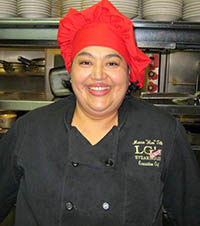 “I am thrilled to be nominated by my peers and included in Best Chefs America,” states Chef Mo. “This recognition is truly an honor and gives me yet another reason to be appreciative of my fellow professionals and chosen profession.”